Much of the Sonoran Coast is low coastal plain, gradually sloping to a line of dunes, then an endless beach, or broken into a string of sandy barrier islands covered with mangroves, backed by a shallow lagoon. Such a coast is not the best paddling water. The endless beach sounds good, but it means you have to launch and land in surf. The mangrove/barrier island sections of the coast make for safer landings, but they are infested at dawn and dusk with clouds of sandflies and mosquitoes. And from the water, the landscape is flat and featureless. 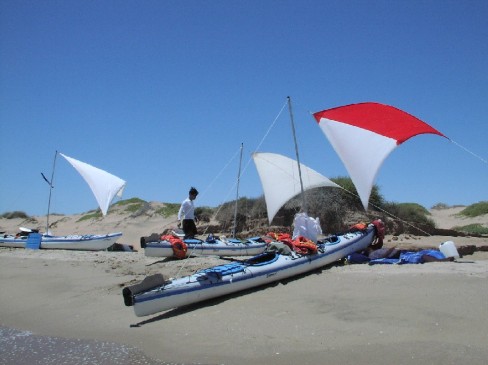 Broad beaches backed by low dunes make a picturesque picnic site, but getting in and out of the water can be hazardous. The sails are positioned for shade.

But there is one stretch of coast where a range of low mountains runs right into the sea. Here the coast is jagged and rocky, with high headlands and deep, sheltered coves. This range, called the Sierra el Aguaje, runs from just south of Guaymas, north through San Carlos to Tastiota, encompassing about 40 miles of coastline.

Rocky headlands alternate with sheltered bays with sandy or gravelly beaches. Protection from surf means easy and safe launchings and landings. The rocky shore is good for fishing and snorkeling and for collecting dinner. It’s also a good place for a hike.

This coast is much more interesting, from a distance, and up close. 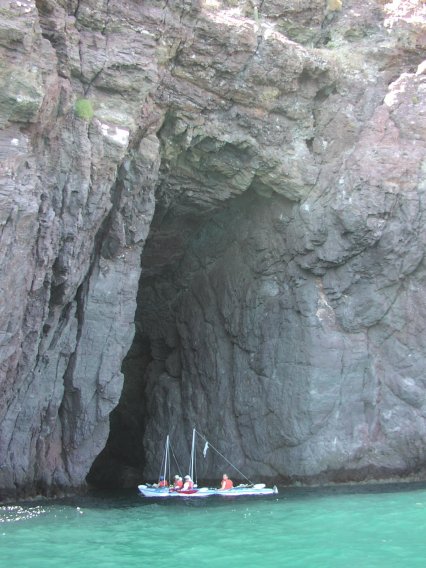 Poking our noses into one of the many caves.

Kayaking is not blue-water sailing: we want to be among the reefs and shallow areas. Here, in the clear water, we can see schools of fish, watch birds diving for their dinner or resting on the cliffs, and playwith the waves and currents. And the rocky coast of the Sierra el Aguaje is the best place in all of Sonora to get our blades wet and have some fun.

Light show at Half Moon Caye

Having recently returned from Belize, I will be posting some stories of my recent experiences in that awesome country, and especially from Half Moon Caye at Lighthouse Reef, in the Caribbean Sea.

There is nothing like a good thunderstorm for evening entertainment at Half Moon Caye. But this one was unlike anything I had seen before. Not because of its intensity, but because of its duration, and the strange shapes and patterns it drew in the night sky.

Thunderstorms at sea more commonly happen at night than during daylight hours. This is because the sea cools down so slowly, compared to land, and it is usually the temperature difference that is the final trigger for the electrical activity. Vertical air movement builds up a static charge between cloud layers, and when the charge is great enough, electric currents will connect the charged layers with explosive results.

We were expecting a weak cold front to arrive in the evening. All day the clouds had been building, and winds were unusually light. As darkness set in, the clouds started to pulse with light.  This went on eerily, for hours, with no thunder, none of the crash and boom you associate with a proper thunderstorm.

When the storm finally reached I was sitting with my good friends Doug and Jan Kilburn and my new friend Robert, sipping single-malt scotch. For three hours, the light show danced overhead, in great, branching streaks. Lightning was so frequent as to be almost constant, but when a gap appeared we were plunged into utter darkness. Then it would start up again and entrance us with its weird shapes.

Lightning that hits the ground (properly called Ground-to-Ground or GG), usually follows a main lead, hundreds of times brighter than the many leaders that don’t quite make the connection. This is what we think of as a “bolt’ of lightning. But this storm was all within the same cloud (Intra-cloud or IC), an intricate branching of leaders, all of roughly equal brightness, that etched the sky with what looked more than anything like the roots of a great tree.

Perhaps the single-malt helped, but this was definitely the best light show I have ever experienced. And what better place to view such a show, than here, on Half Moon Caye.

I injured my back in Belize, so I came home early. I haven’t seen the Sonoran Desert in April in over a decade, so it is a nice surprise to see the palo verde trees in bloom and to enjoy warm dry days and mild nights.

I can’t endure sitting in a kayak just yet, and the sea isn’t warm enough to snorkel in, so I am confined to bed rest and soon I will do some light hiking. This is my first post on this new blog, so my rambling is more to fill space and see how it looks than to enlighten anyone who might be out there.

The purpose of this blog is to chronicle my life. Topics will range from the natural history of the Sonoran Desert and Sea of Cortez, to life as an ex-pat, to random musings on events worth noting. Hopefully worth noting to someone, but no matter. A blog is always an exercise in narcissism. Cheers.