In truth I had never seen so many birds. We were camped on a long sand spit near the mouth of the lagoon. As the tide raced in, it swept with it millions of small, shiny fish, a dark mass moving and pulsing in the clear water.  Brown pelicans, terns and gulls wheeled and dived in their thousands on both sides of the spit, until the fading of the light as the sun sank over the desert to the west.

Estero Tastiota is a large, shallow lagoon studded with mangrove islands and backed to the N and NW by even larger shrimp farms. To the WNW, a long, nearly straight, continuous beach backed by scrubby dunes and flat, open desert, stretches all the way to Punta Baja. Here, at the mouth of the lagoon, the coast runs up against the Sierra El Aguaje, and takes a sharp turn to the SSE. Our goal is to follow this rugged and rocky coast to our take-out at La Manga Dos, just N of San Carlos.

I awoke at first light to the beating of wings. I emerged from my tent to see wave after wave of pelicans, gulls, terns and cormorants as they arose from the waters of the lagoon, passing low overhead on their way to the sea. The shoreline was lined with the bodies of tiny fish, no doubt killed by the plunging of beaks and bills into their tight schools the evening before. The sandy bottom was dotted with more corpses, which were keeping the blue crabs busy, scavenging the leftovers.

Beating wings, splashing dives and the raucous cackling of terns filled the air as the feeding frenzy continued. Everywhere you looked there were birds, soaring and wheeling in the sky, passing urgently overhead, diving in the sea, taking off to dive again. Our location on a spit of sand separating the coast from the lagoon put us in the middle of the action. Never since the Serengeti Plain have I seen the mesmerizing spectacle of so many animals in one place. You couldn’t stop watching it.

As the sun rose higher, the feeding activity began to fade. We made breakfast and packed up camp. Before we were to leave the lagoon, we paddled to a nearby island, to search the shallows for clams. As most of us squidged our toes in the mud, feeling for clams, two of our party, avid birders, explored among the islands and channels. They reported seeing a flock of roseate spoonbills, some white pelicans and a variety of herons and egrets. Once we had enough clams, about 160, we decided we had enough and headed out of the lagoon, and set our course along the rocky coast. 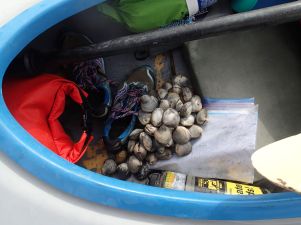 I am a Biologist, a Naturalist, and a Sea Kayak Guide. I live in a beach town on the coast of the Sea of Cortez, with my lovely wife, Lorena.
View all posts by jackwildeadventures »
« Previous post
Next post »